The latest film reincarnation of the king of kaiju is the very aptly named Shin Godzilla – the movie really does bring back the true essence of Godzilla from the past. Directed by Hideaki Anno (Evangelion) and Shinji Higuchi (Attack on Titan), Shin Godzilla (or Godzilla Resurgance as it is known outside of Japan) is the 29th installment in the franchise produced by Toho.

As with all classic Godzilla films, it revolves around Godzilla making a “sudden” appearance in Tokyo and floundering humans attempting to stop him and salvage what’s left of their broken infrastructure.

Fun Fact: In all 31 Godzilla films, the only place in central Tokyo that has never been destroyed is the Imperial Palace.

Long-time Godzilla fan Shaun Kok notes that the plot is very much like the early showa era Godzilla films which also focused more on the human efforts of evacuating the city and their military forces repelling the monster similar to the original film in 1954.

However unlike Godzilla films of old, the hero this time isn’t a scientist, it’s a politician. Most of the film’s narrative is told through the perspective of the Japanese administration that has to deal with this (un)natural disaster and follows their (in)ability to handle the situation.

The film is indicative of the Japanese need for structure and system, with many decisions and actions having to go through layers and layers of bureaucracy before anything can be done. This is shown throughout the film repeatedly as the higher ups of the cabinet attempt to manipulate the hierarchical nature of the system they reside within to protect themselves at the expense of the lives of their citizens while the up-and-coming new guard attempts to find a faster solution to their king-sized problems to minimise damage.

It’s reflective of how the actual Japanese administration (mis)handled the 2011 Tohoko earthquake and tsunami as well as the Fukushima disaster.

For those unfamiliar with Japanese culture and mannerisms, these conversation-driven scenes can seem long, a little convoluted and unnecessary. However, these grim scenes are often played overly-serious which makes for some unexpectedly comedic scenes.

Hiroki Hasegawa plays Rando Yaguchi, the protagonist who throws together a ragtag team of misfit scientists to try and save Japan. He’s tenacious, insightful and a natural leader. He’s easy to watch and root for as he plays against the responsibility-resistant old guard but due to the distant nature of the film it’s hard to feel any real affinity for him (or any of the characters).

There are a number of scenes that have the characters speaking in English, most of them revolving around Satomi Ishihara who plays Kayoko Ann Patterson, the Special Envoy for the President of the United States. Overall, these scenes weren’t as painful as you might expect them to be although Ishihara does not come across as a native American-English speaker like the movie implies at all (in fact she’s upstaged in one scene by Yu Kamio with his near flawless pronunciation and enunciation).

Conversations and scenes involving the Japanese and American administration provide a unique insight into the power play involved in politics between two nations when something on such a massive scale happens. It’s quite interesting if you can read between the lines. 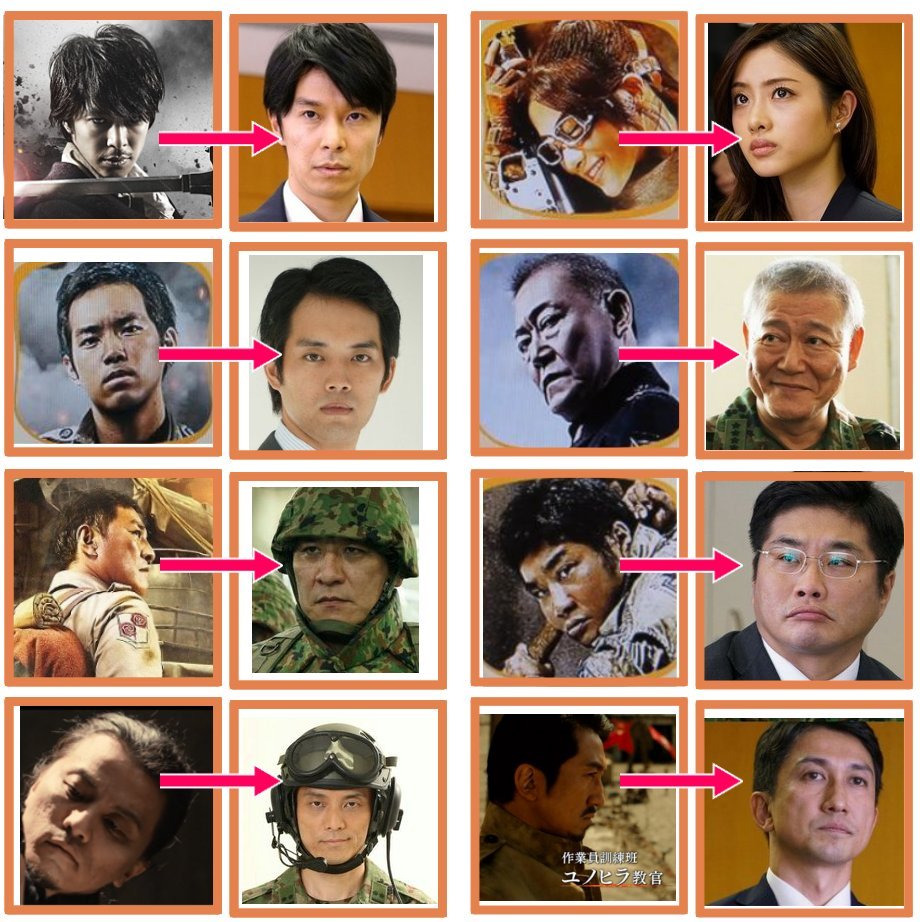 Speaking of actors, many of the actors in Shin Godzilla also appeared in Higuchi’s previous film Attack on Titan. How many can you spot?

True to Hidaki Anno’s style, Shin Godzilla features many visual and audio cues which hearken back to his masterpiece Neon Genesis Evangelion (NGE). And since the soundtrack is by Shirō Sagisu who scored NGE, it’s no wonder why. NGE fans watching the movie will find themselves on the edge of their seats waiting for the EVA unit to appear and take down Godzilla.

Apart from that, Sagisu also two old scores from the original Godzilla movie by Akira Ifukube – the Godzilla Theme and Military March – and gives them an updated sound that fits the modern film. Hardcore fans will enjoy these tributes.

Godzilla’s new design is much more organic and monstrous looking than before. The goofy googly eyes and perpetual what-the-@#$* hands are a little silly but somewhat endearing – at some points of the movie, it almost looks as if Godzilla is looking to the sky and asking why the puny humans keep attacking him.

Shaun points out that his look seems to be an amalgamation of the 90s Godzilla (upright) and Godzilla 2000 (with glowing red spots similar to Burning Godzilla).

The film’s title, Shin Godzilla could also be a play on the idea of a new Godzilla (in Japanese shin can be read as 新, which means new or as 真 which means real or true). The movie shows a same-yet-different Godzilla which Shaun describes as similar to “The Beast from 20,000 Fathoms”.

Keep an eye out for Godzilla’s tail, there might be some sequel clues in there.

The role of the titular character is played by Kyogen actor Mansai Nomura. Similar to Attack on Titan, Shin Godzilla‘s kaiju scenes are filmed through a mix of 3D graphics and motion-capture. It almost seems as if Higuchi used Attack on Titan as a trial run for Shin Godzilla — and it most certainly paid off.

The special effects used in the show are pretty decent, Godzilla manages to blend pretty smoothly with his surroundings and everything seems to be in scale with each other.

Shaun also points out that much of Godzilla’s scenes were shot from very low angles to emphasise what a colossal beast he is. It’s a method used in many Japanese Tokusatsu films where giant monsters are involved.

Shin Godzilla is a fairly enjoyable film regardless of whether you’re a Godzilla fan or not. It’s a good introduction for those unfamiliar with Godzilla lore and also has enough throwbacks to keep Godzilla-lovers entertained.

Shin Godzilla will also be the first Japanese film in Singapore to be released in IMAX and DBox cinemas so you can enjoy the massiveness in (almost) full scale!

All hail the king of Kaiju!

Check out the trailer below: